My first car out of HS

A place for mechanical discussions that are not motorcycle related. Boats, Cadillac's, mowers, tractors, Trucks Et all.

This is me when I was 17 in 1964 washing my first car. I'd had it almost a year at this time. It's a '61 Pontiac Parisienne, and a top of the line car, but it was pretty well options free. It didn't have a radio when I bought it, but I soon fixed that. I mean, it didn't even have a cigarette lighter. Those were options back then. It had a 230 cu.in. straight six.
The Chevelle isn't mine, but it looks identical to the one I had. It's exactly the same colour, the same stance, and it even had those red-line tires. An SS396/375hp/4speed, that I bought in 1970 with 6000 miles. Those were great times for a 23 year old.

Me and my 1st car (1964).jpg
1969 CHEVELLE SS.jpg
You do not have the required permissions to view the files attached to this post.
"ASSUME NOTHING"

"Not riding a motorcycle is wrong"
Top

68Dodge-SuperBee-org-LF.jpg
Not mine but close.

Had this for 9 years and 5 engines.

What engines did you have in the B?

383 Magnum with high lift long duration cam, 650 cfm Holley dual pumper, high rise manifold, dual point distributor and headers. 4 speed and 3.23 rear gears. Hung out at a local "car club" with all the gear heads from age of 12 on and learned a lot. Rebuilding engines at 18 years old.
The difference between stupidity and genius is that genius has its limits.
Addicted to Honda's
Top

Hillman Minx.
You do not have the required permissions to view the files attached to this post.
Top

I got my first bike when I was 16 but didn't get a car until I was 23. First was a 1956 Mercedes similar to this. The stupid
1956 mercedes 220s.jpg
thing almost bankrupt me to keep it running so I sold it. Got my next car at age 27 just before I got married but I always had a bike.
You do not have the required permissions to view the files attached to this post.
Top

I had a bike right from the day I turned 16. Got it before I turned actually, but got my license and bike cert on the day.
It was a 1978 Honda CX500 that had a small Vetter fairing on it. Looked like this one:

Rode the bike everywhere till snow hit, then pulled out the first car from storage.

My first car in high school was a 1981 Plymouth TC3 that was my Dad's commuter car. It sat for a few years before I got it. My first vehicle after high school was a Dodge Ramcharger As with many here, I have had a bike the whole time as well!

This thread looks like scenes from Mannix or cannon back in the 70’s.
Just love seeing those cars and reading the stories.
Dave

Whiskerfish wrote:I never owned a car till after I got married. Before I joined the navy in 78 I had owned too many motorcycles to count. Probably 30+. I would buy stuff other kids had worked on and screwed up for cheap and fix them and then sell them. For cars Mom would buy a winter beater every fall and the big Olds station wagon would go in the garage for the winter to keep the salt off it. We all shared it whatever the Winter Bomb was. I remember a 71 Maverick, a 60's something covair and several others. Once I left home Dad "loaned" me his 75 Chevy Monza under the pretense that I would fix it up and return it. I fixed it up got drunk and totaled it. Come to find out he planned to give it to me. The first car I actually owned was a 71 Ford 4 door LTD sedan. Was a wedding gift from my older sister. It did not last long. It looked real nice but it spent too many years in the Buffalo salt and the body would shift on the frame when cornering. After that was a 71 Dodge Challenger with the inline 6. It drank oil like gas and I had no place to work on it. Traded it in 82 for a brand new Ford EXP. A fun car but not really appropriate as my Step Son quickly outgrew the back seat area. After the move to Maine in 83 we got a Toyota Tercel Station wagon and a early 70's Toyota SR5 Longbed PU as a second. Sold the Pickup before the cross country to catch a plane for Hawaii in 87. Had that Tercel a long time. Then a older toyota sedan as a second car while in Hawaii. We brought the Tercel back with us, after we returned to Virginia in 90 and then we got a 92 Ford Explorer 2 door. Rusty drove the Tercel station wagon for a work truck until she got T-Boned and then I bought a bare bones Isuzu Pickup for the Wife's work truck. Then traded the Explorer for a Toyota T-100, and bought my Wife's First Wrangler. The T-100 was eventually traded for a Tundra and the Wrangler was replaced with a new Wrangler. The Tundra was replaced with my Current 2010 Dodge Ram and the 2nd Wrangler was replaced with a Nissan Pathfinder that we just Traded last month for a new Wrangler Unlimited.

Feel like I am out of breath from trying to remember all that!!!!

At least you can remember it all!
"ASSUME NOTHING"

"Not riding a motorcycle is wrong"
Top

My first car was a '52 Chevy. Paid cash for it ($75) out of my hay hauling money. Burnt more oil than gas, but it was MINE! This picture is not mine, but just like it.
52delux.jpg
You do not have the required permissions to view the files attached to this post.
Top

My 1st car was a 1972 Chevy Chevelle. It had a straight 6 , even with the straight 6 it was still a pretty fast car
Top

First car was a 68 Ford econoline van.
I asked the PO "what's that knocking sound mister?". He said, "That's just a tappet Sonny."
Sure it was. Well it ran for about 6 months and threw a rod. That's when I started to learn as I bought a used engine from the salvage yard
My dad laughed at me. But I learned. He told me not to buy anything until he could check it out first. But nooooo I was 18 and knew it all. Dear old dad ever let me forget. We kind of had fun with it over the years. And there did come a time where I had learned enough that I taught him a few tricks.
(Never mind that problem I had with GW clutch replacement).
"Less is More" Anonymous

This was my first car.....a 1957 BMW 600 4 seater, wih a front door and a side door for the back passengers.
It was very spacious and had a 2 cyl 600 cub. cm/cc (36 cub. inch) aircooled boxer engine from the BMW 600 motorcycle...19,5 hp...dry weight 1210 lbs
Max. speed 103 kmh (64 mph) was enough those days; even on the German "Autobahn"; to travel from the Netherlands to my girlfriend in Germany
Roadholding was extremely well with tubular frame and 4 independently sprung wheels. 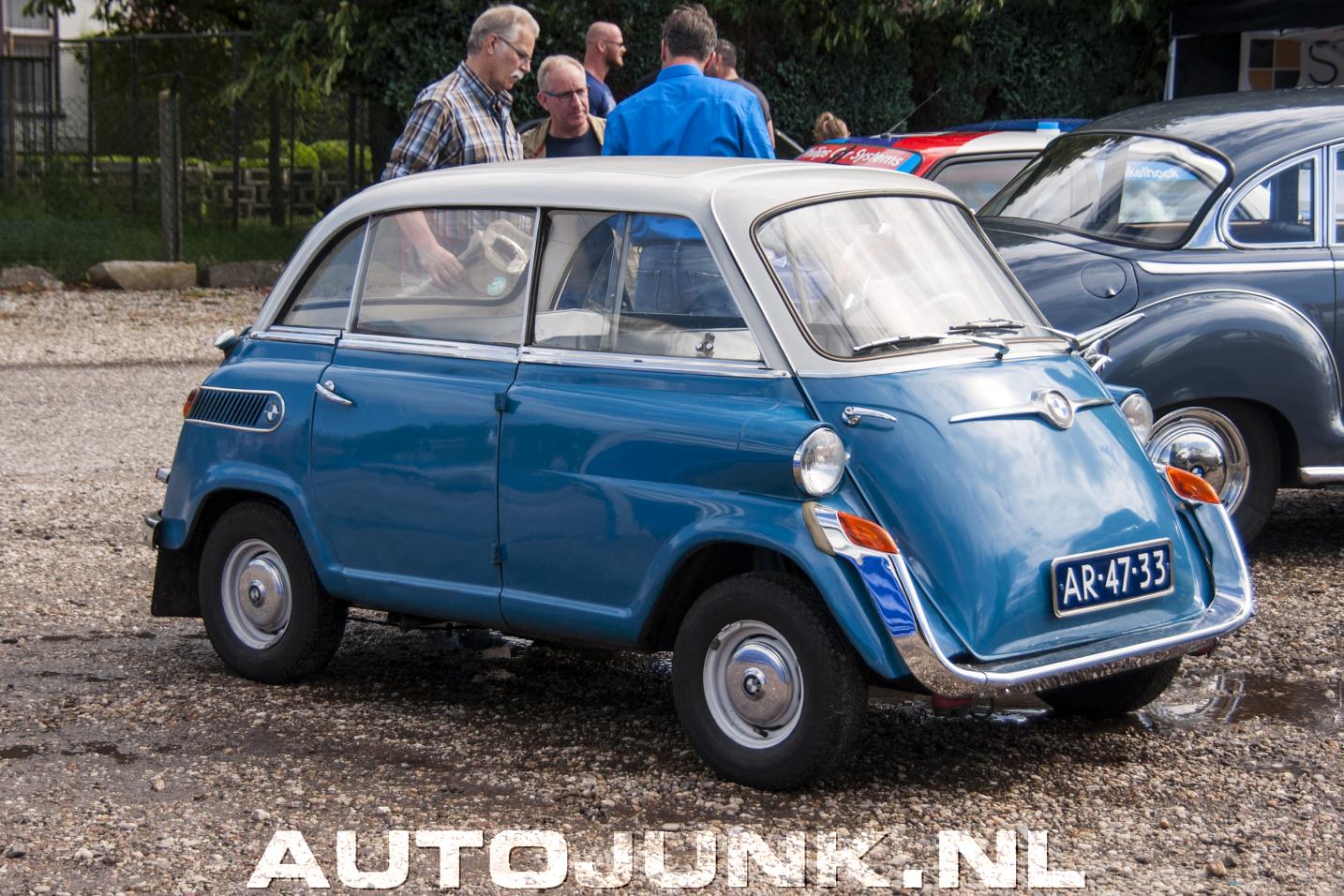 My first car was a maroon '66 Chevy Impala with 283ci engine and power glide transmission. It was a beauty - freshly repainted when I got it. Within a short time, (not long after I coincidently changed the oil) it started burning oil like you wouldn't believe. The blue cloud was so bad that a cop pulled me over for defective equipment and told me to get it fixed. The fix cost $400 - a junkyard engine installed by a very cranky, angry mechanic. It ran fine after he plugged the "new" motor in. I enjoyed the car for less than 2 years when we discovered that the frame was badly rotted over the rear wheels. It was so bad that the frame would flex when going up an incline and tighten the emergency brake cable, locking up the rear wheels!

Some guy bought it from me for his girlfriend, knowing full well that it was destined for the junkyard.

My first car wash on Fathers new 53 Cadde sedan Haaaaaaaaaaaaa :<)
You do not have the required permissions to view the files attached to this post.
Top
Post Reply
51 posts

Return to “Trains, Planes, and Automobiles”