The valve's sealing area is its angled face. This precious, precisely-made surface is reasonably tough, but over time it gets pretty beat up. Spring tension, combustion's forces, and the camshaft's relentless pounding -- all combine to wear this face, eventually producing on it a ridge or ring, the imprint of the cylinder head's valve seat. This classic valve wear is called recession, because the valve actually withdraws into the cylinder head. Normally, recession happens very slowly. In our grandfathers' day 30,000 miles was common. And it was easily corrected. The valve was removed from the engine and its ridge ground out on a special machine that had a super-smooth grinding wheel. You might be familiar with this.

But 70s and 80s vintage Japanese bikes are unique. You don't grind their valves, and recession on them is a whole 'nother story. 1 On May 4, 1971 Honda issued Service Letter #84 titled, "Intake and Exhaust Valve Refacing - Not Recommended". The bulletin heralded a sea change about to sweep the Japanese segment of the motorcycle industry. The backstory was that no longer would Japanese maker's valves be made the traditional way, of two pieces welded together, the valve's head of a material optimized for its role and the valve's stem similarly of a unique metal. 2 From this point on, the valve would be a one-piece forging, and a new thing, a thin plasma coating called Stellite, would be added to the valve for durability. 3 The bulletin's succinct message was that due to this coating, and in a departure from standard automotive practice, this new-age valve could not be refaced during an engine rebuild. Replacement was now the only option. 4

However, it soon became painfully obvious that these new valves were astonishingly soft. By 15,000 miles and in many cases sooner, they were badly receded, i.e. their sealing faces ridged -- despite the Stellite -- and had consequently lost half their sealing ability. This prevailed for many years. In fact it wasn't until almost 1990 that Honda and the other Japanese manufacturers would catch up to the issue. 5 Thus for a model range of roughly 20 years, Big Four bikes suffer the curse of soft, fast-wearing, throw-away valves, and all of these engines exhibit abnormally (and often seriously) low cylinder compression as a result. 6

In fact, low compression is the first and most significant practical consequence of these cheaply-made valves. All vintage Japanese engines, unless the valves have been replaced recently, need a valve job. All of them. The symptom is significantly low compression, typically a loss of more than 35 percent. Instead of 170 psi they exhibit just 110 to 130. Proper tuning of these engines is very problematic until they are repaired.

An added consequence of unusually fast valve recession is the valve moves steadily upward toward its tappet, reducing precious clearance. This further reduces compression and more importantly, also reduces valve cooling, leading quickly to burnt valves. In many engines, recession happens so fast the rider is aware of it only when discovering serious engine damage. 7

A third problem is ignorance. Many mechanics persist in refacing these valves. That is, grinding the valve's sealing face as was common until the 1970s. But removing a Big Four manufacturer's valve's special coating can cause it to quickly be heat damaged and will certainly increase its already rapid recession rate. The correct way to handle receded valves is to replace them. Some folks default to lapping the valve, that is, rubbing the valve against its seat with an abrasive paste in-between. Though countenanced by some manufacturers, lapping is a hack procedure. 8 It does not address recession, but instead makes recession worse. 9 At most consider lapping a "get it home" effort and no more than that.

The good news in all of this is that, despite having the period's uber-soft valves (which it does), the Gold Wing cylinder head is somewhat unique in that it also has softer valve seats than in other Honda motorcycles, thus valve recession is slowed. It's less severe, though you need to still expect it. More good news is that high quality stainless steel replacement valves are available for vintage Japanese bikes. They really need them. 10

Closely monitor your valve clearances and cylinder compression. This will help you detect valve recession early on and it's also important for optimizing engine performance. Throw away the valve lapping stick; determine to do a valve job the right way.

Notes:
1 As is usual in powersports, cylinder head terminology is not well controlled. "Grinding" and "lapping" are not the same thing, though they are often spoken of interchangeably. Both are bad practice on vintage Japanese engines. Grinding, putting the valve against an actual grinding wheel, is more accurately termed refacing. Lapping describes the all-too-familiar abrasive paste procedure.

2 In those days, you could take a magnet and detect the difference between the valve's stem and head. Kawasaki's 903cc Z1 was one example of this two-piece valve. Honda's CB450 DOHC twin was another.

3 The new valve was likely made by spinning a heated metal rod and slamming it against a hard surface to create the mushroom that was then machined to make the valve's head. Before long, all the Japanese manufacturers started doing it this way.

4 The Stellite coating is only a few thousandths thick, and the valve is soft underneath. You really don't want to fool with that.

5 Every career mechanic has heard of "the Ninja syndrome", which refers to the period in the mid 1980s when Kawasaki's first-generation Ninjas' valves receded extremely quickly. By 6,000 miles they were receded so badly you could literally shave with them. No joke.

6 Yamaha and Suzuki came late to the soft valve party, so in their case the period is shorter.

7 The bikes most at risk for burnt valves are the four-valve-per-cylinder models.

8 Who knows why OEMs continue to endorse lapping. They seem to be appealing to the lowest common denominator. And knowing dealers, maybe they have no choice.

9 This is easily observed by the fact that lapping does not completely restore sealing. While it may improve slightly, the engine does not regain normal compression. And stop to think: if recession is the problem, and it is, how does increasing recession solve anything?

10 The cost of stainless steel valves is today comparable to what OEM were when they were still available. Commonly available pattern-made valves however are less. 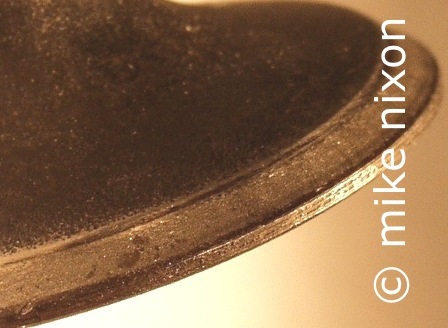 Unfortunately, we are stuck with what we have, correct?
Top

ericheath wrote:Unfortunately, we are stuck with what we have, correct?

You mean for four-cylinder Gold Wings? Not exactly. Of the three best-known stainless steel valve suppliers, two of them carry valves for a very limited range of motorcycles and the third does not have any bike valves in its catalog. However, all three companies make valves to order, Kibblewhite (the best) at about $100 each, Manley at quite a bit less (I have used both). Don't have prices for Ferrea but they are known for being reasonable. Not having sourced stainless valves for Wings lately the first step would be to see what the manufacturers already carry that is close. Yeah, not easy. It's a demand-driven thing. But worth the trouble in my view.
Last edited by mikenixon on Tue Sep 24, 2019 5:24 pm, edited 1 time in total.
Mike Nixon
www.motorcycleproject.com
https://www.motorcycleproject.com/text/ ... _carb.html
https://youtu.be/CDnzwDWhN24
https://www.motorcycleproject.com/text/lies_ether.html
Top

Another way to look at it is the readily-available pattern made valves are very inexpensive, enough so that replacing them every 30,000 miles is not so bad. But that would not be my approach.

mikenixon wrote:Another way to look at it is the readily-available pattern made valves are very inexpensive, enough so that replacing them every 30,000 miles is not so bad. But that would not be my approach.