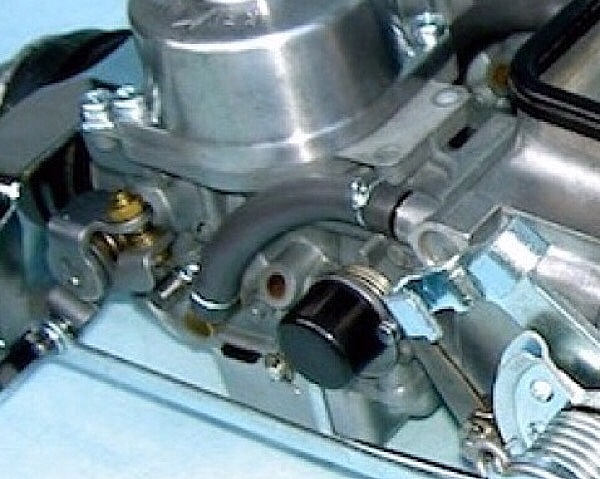 A lot of folks have trouble envisioning the roles of the various rubber hoses on carburetors. Understandable. The way Honda has done their hoses can be confusing, especially in later emissions years. But at least they didn't make the same mistake Suzuki did of for years making fuel and air hoses the same size! That resulted in some dangerous outcomes, even a few fires.

Among the misunderstood hoses on Hondas are the four short ones bridging the carburetor bodies and air plenum on the GL1000 carburetor set. What are they for? What do they do?

You'll recall from previous articles that every atomizing circuit on a carburetor has three legs: one for fuel, one for air, and a third that combines the two before discharging the result into the carb's bore. The air leg is how a carburetor circuit atomizes, that is, turns fuel into the mist that the engine can then vaporize into a burnable ether. The air branch spikes the fuel, breaking it into droplets as it rises in the jet. Ever wag your finger back and forth in front of a garden hose? That's what atmospheric air does, it sieves the fuel rising in the jet. It chops it into bits.

Those four hoses on the GL1000? They are part of each idle circuit's air bleed. The brass elbow on each carb's side is the entryway into the air branch of the idle circuit. The hoses do a really unimportant job. They simply connect the idle air bleeds to the engine's air filter so that the idle circuit is fed filtered air. That's all those hoses do; they're sort of mini air filter ducts. Thus the state of the air in the hoses is neither positive nor negative pressure. That air is at atmospheric pressure, just as the air filter is.

But wait! This means you could remove those hoses and this would have no effect on the carburetors! That's correct! It would change nothing. All it would do is expose the idle circuits to dust and moisture. The hoses are not vacuum hoses as many assume.

9am on a sunday morning. I'm one coffee in to the day and I've learned something new.