Well, I had a giant update planned, with pictures and everything, about my quest to replace and improve the pickup coil plate, BUUUUT it's not worth posting. Because it didn't fix the problem.

Well, it fixed A problem. The one (old) pickup was completely shot, and while it's still a miracle it ran at all, "lack of spark" was never the issue. Checking the Colortune, even when the engine misses, there's still spark there. Oh well. At least I have a confirmed working pickup coil and ignition coil, and the ignitor box is doing it's job.

NOT good at motorcycle repair.

(I still consider the whole exercise a plus, though. My pickup coils were on the way out- the wires were broken, and even measuring at the pickup, it was trashed. Better I have a known working set, and I replace it now rather than on the road someplace.

So ignition is good. Compression is good. Valves are good, seeing as how Robin basically did them for me. Cylinder 3 and 4 is acting up, and while they are fed by the same coil, they are also fed by the same carb. I'm double-checking float levels, because everything beyond that is split up within the carb body for each individual cylinder, but worst case scenario I DO have a spare carburetor to swap to. It's not in as good a shape as the one that's on it, but if the current carb doesn't work, it doesn't work.

In your defense, it is not one of the simplest two wheeled machines to sort out.

I think today I'm throwing in A towel and replacing the entire center carb body. I've got a replacement, but it's not in as good a shape as the original one that came with it. Thing is, I'm running out of other things to address, and none of them have affected the symptoms I'm getting one bit.

The replacement carb body is a bit grodey, but the passages seem clear, and all the guts are new (although I may swap the needles around, just for fun), so who knows. At least I'm getting REAL good at tearing these carbs apart. I'm confident that with the tank off, I can remove these carbs in less than 5 minutes.
1969 CT90- Needs rear tube and possibly rings
1976 GL1000 (Yellow)- Carb Shenanigans.
1984 GL1200 Standard- For Sale! viewtopic.php?f=6&t=69166
1980 KZ1300- Carb balancing when the weather warms up
1972 CB750 Barn Find- Tires and Head Bearings

That is the one upside to the ridiculous multi-piece airbox on the KZ- there's a small piece held in by two very easy to get to screws that just slides back and off to the side. Then it's just disconnecting the lines and cables, loosening the three band clamps on the engine side, and pull the carb rack straight out. At this point I could do it in my sleep.

I couldn't work on a CBX. I'm not a good enough mechanic to get it running right without pulling the carbs on and off at least 30 times.

As for my project, the new carb body is in place. While all I had time to do was hook it up with a VERY baseline mixture setting and bench sync, I did manage to get it running on all six cylinders, and she seemed to start pretty easy. Next week I'll do a marathon session of tuning and syncing, and see if any of it made any difference.
1969 CT90- Needs rear tube and possibly rings
1976 GL1000 (Yellow)- Carb Shenanigans.
1984 GL1200 Standard- For Sale! viewtopic.php?f=6&t=69166
1980 KZ1300- Carb balancing when the weather warms up
1972 CB750 Barn Find- Tires and Head Bearings

Whelp, that's enough mechanic-ing today. A bit of a correction from yesterday- I wasn't able to get it running on all six. I only managed 4, which it still idles rather nicely at. Mostly because the center two (which are fed by the carb body I replaced) were completely dead. Oh, I had spark and compression. But no bang. I could get an anemic, partial "eh" firing if I cracked the throttle (something you're NOT supposed to do with a Colortune, oops), but nada on idle.

Swung the float valve to each end of the high-low settings, with no change. Now, if I had to guess, I'm wondering if my bench sync was not that great- the fact you have three settings for three carburetors, with no "baseline" carb like a Goldwing, combined with the multitude of springs and ball sockets, it makes getting a even bench sync rather difficult.

However, at the point where I thought that MIGHT be my issue, I was ready to throw the whole carb rack across the lawn. As it is the only casualty was a can of starter fluid aimed at a tree, and I don't think I even hit the tree.

So we're taking a break. At least a day, maybe two.

(At least in my fugue state of "try everything at once because I'm frustrated", one of my flailings was to check engine compression when it's hot. Straight 125 psi's across the board. Between this, the new coil, new pickups, and identical looking sparks from cylinders both working and not, I'm confident I have carb issue. Or a user issue. But either way, we'll crack it eventually.)
1969 CT90- Needs rear tube and possibly rings
1976 GL1000 (Yellow)- Carb Shenanigans.
1984 GL1200 Standard- For Sale! viewtopic.php?f=6&t=69166
1980 KZ1300- Carb balancing when the weather warms up
1972 CB750 Barn Find- Tires and Head Bearings

Apart from a few baffling oddities (soldering copper tubing into your fusebox?), a majority of this bike has surprised me with how clean it is. Case in point, the carburetors: Absolutely immaculate. Observe. 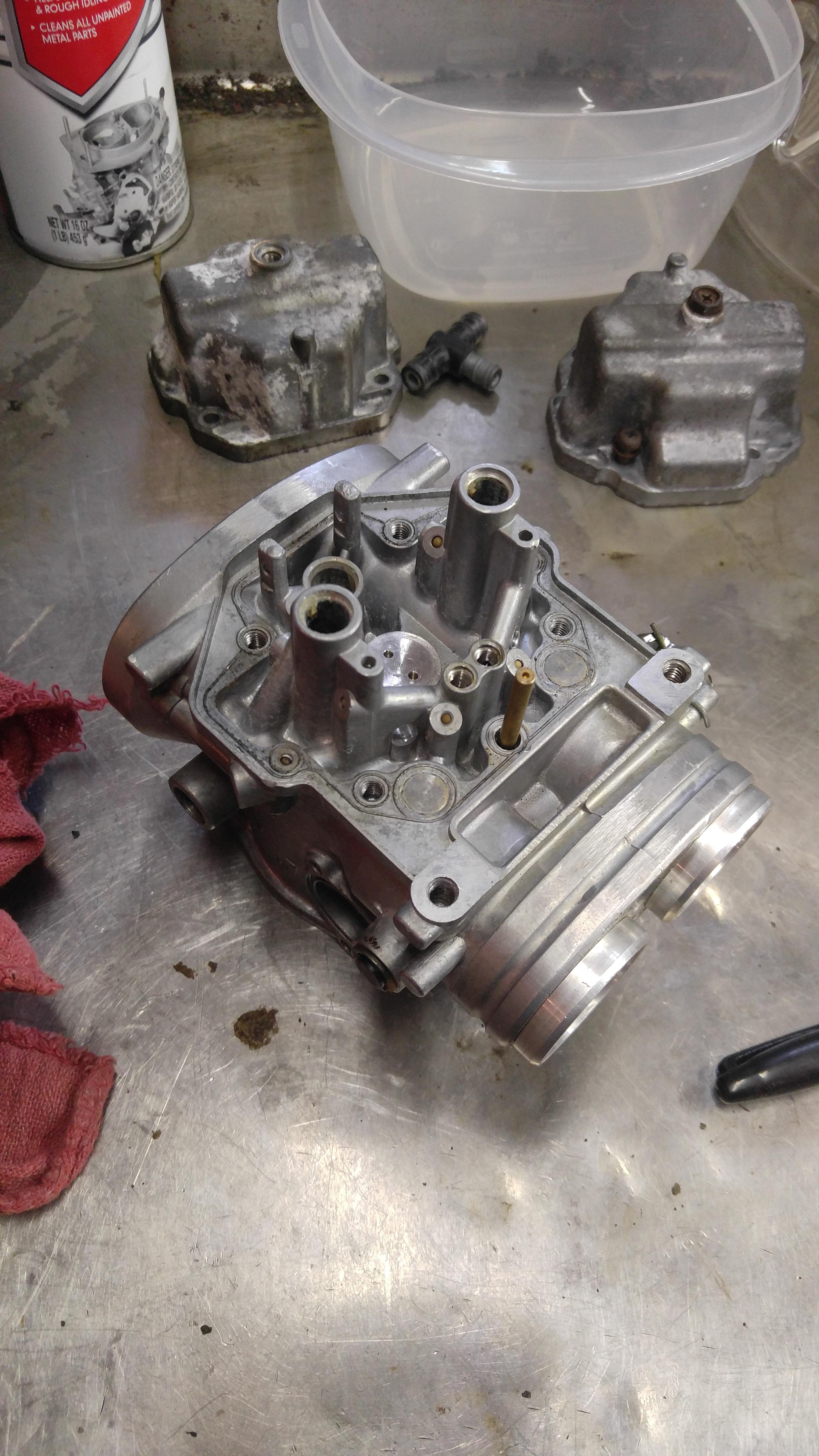 Only one problem. You know why this is OFF the bike? Because it turns out, this little bugger has been giving me most of my issues*. I have no idea why, but when I swapped this carburetor with a replacement that was in worse visual shape, SO many of my problems went away! I'm getting consistent, strong combustion across all six cylinders, without missing or other funky stuff. Why? Who knows?

*That being said, I've still got to lock down a final sync. I've gotten every cylinder to fire really well individually, but there's still some tweaking to be done to make them all do it at the same time. Still, that persistent occasional misfire no matter the rev range in cylinder 3 FINALLY went away. I just have to teak my sync settings to lock everything in.

Speaking of which, here's the mess of a setup I'm currently dealing with. 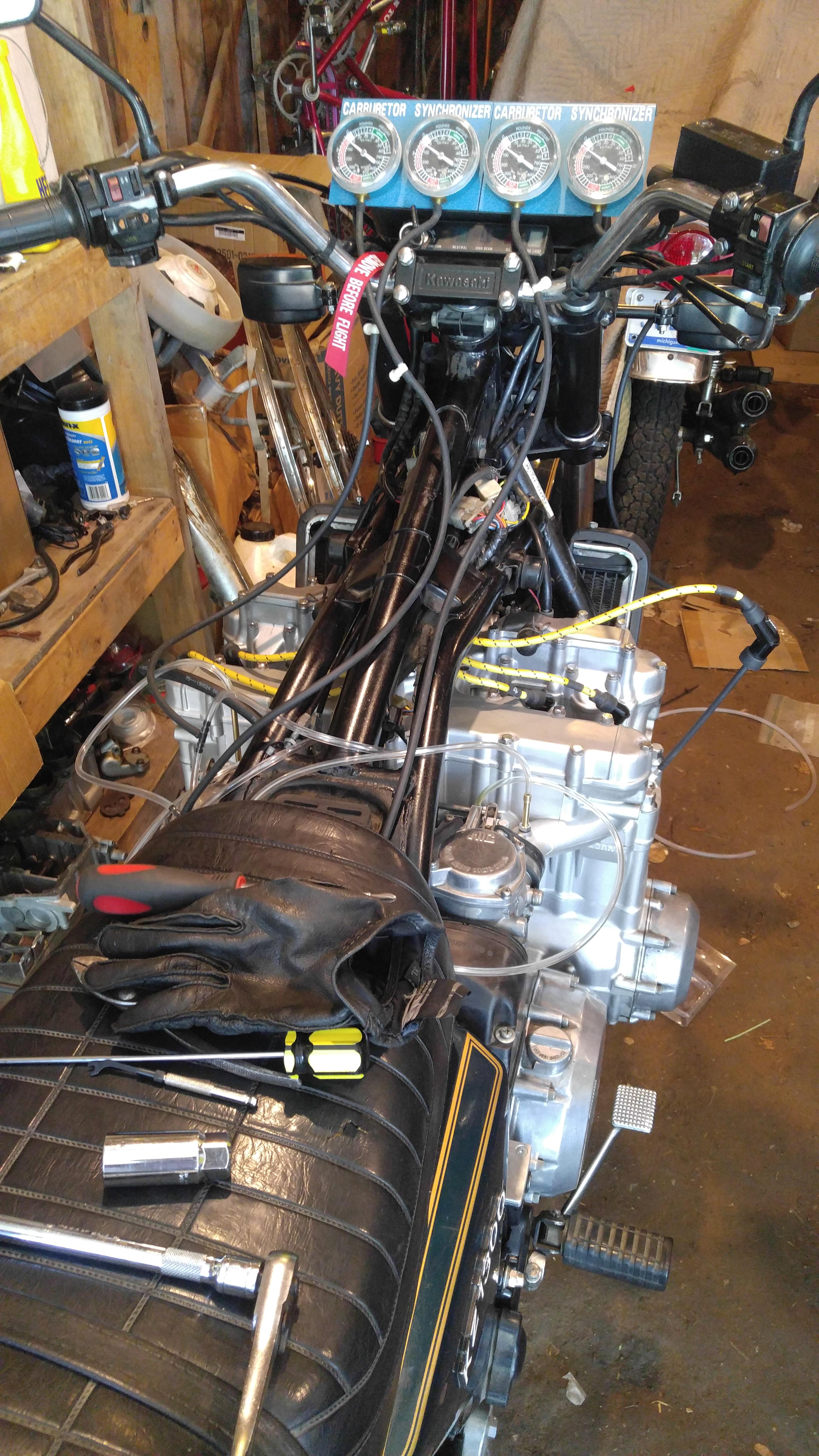 So, I don't want to get too deep into details, just in case I jinx something. Long story short, even after replacing the center carburetor I'm getting the same issues. Not just similar- IDENTICAL. I've got an idea of what's going on, but I want to make sure before I go into it. I should know for sure one way or the other by this weekend.

After replacing the carburetor, ignition coil, ignition pickups, and a bunch of other stuff I probably no longer remember, I'm zeroing in on some more esoteric causes for my chronic poor running issues. Next up- the plugged off emissions control ports. The emissions control itself, while I have one, is a giant ungainly canister that just sits on top of the engine and fills up any free space that MIGHT exist. It does nothing but help the bike pass emissions standards that haven't applied in decades. The PO plugged these ports off in the valve cover, and did a rather clean job of it (surprising, considering his other "fixes"). But, the march of time makes no exceptions, and sure enough both rubber caps were cracked pretty badly.

5 bucks and a trip to Advance Auto Parts later, both plugs were replaced, and a half-hour ride later, here's the verdict:

The Good: All of my "On Deceleration" problems are gone. No more backfiring, no weird hesitation if I try to speed up afterwards, nada. In all honesty, this is probably the more "ridable" the bike has ever been- there's always been this undercurrent of having to fight the thing, no matter how slight. This is pretty much gone. On top of that, this narrows down the symptoms of what's still going wrong. Speaking of which...

The Less-Than-Good: Yup, still a couple issues. First off, that persistent misfire from the left side is still there. It comes and goes, but has never really ever went away. And I'm not convinced it's specific to any real rev range, either. On top of (or related) to that, I've got at least one cylinder that's pretty rich. The engine runs MAGNIFICENTLY (minor miss notwithstanding) for about the first 5 minutes down the road- even the vibration at 3-4k RPM isn't really there. But as it heats up, that vibration slowly gets worse. Not to "shake the bike apart" levels, but definitely "make your hands go numb after an hour cruising at 55". I even parked it for a bit while it was still running, and you could tell it ran like crud after it's really heated up. That may just be a mixture snafu though, and I've got ideas about the miss on the left.

But at the end of the day? I'm making progress, the bike ran better than it has in a while, the weather was great, and who doesn't love some glamor shots? 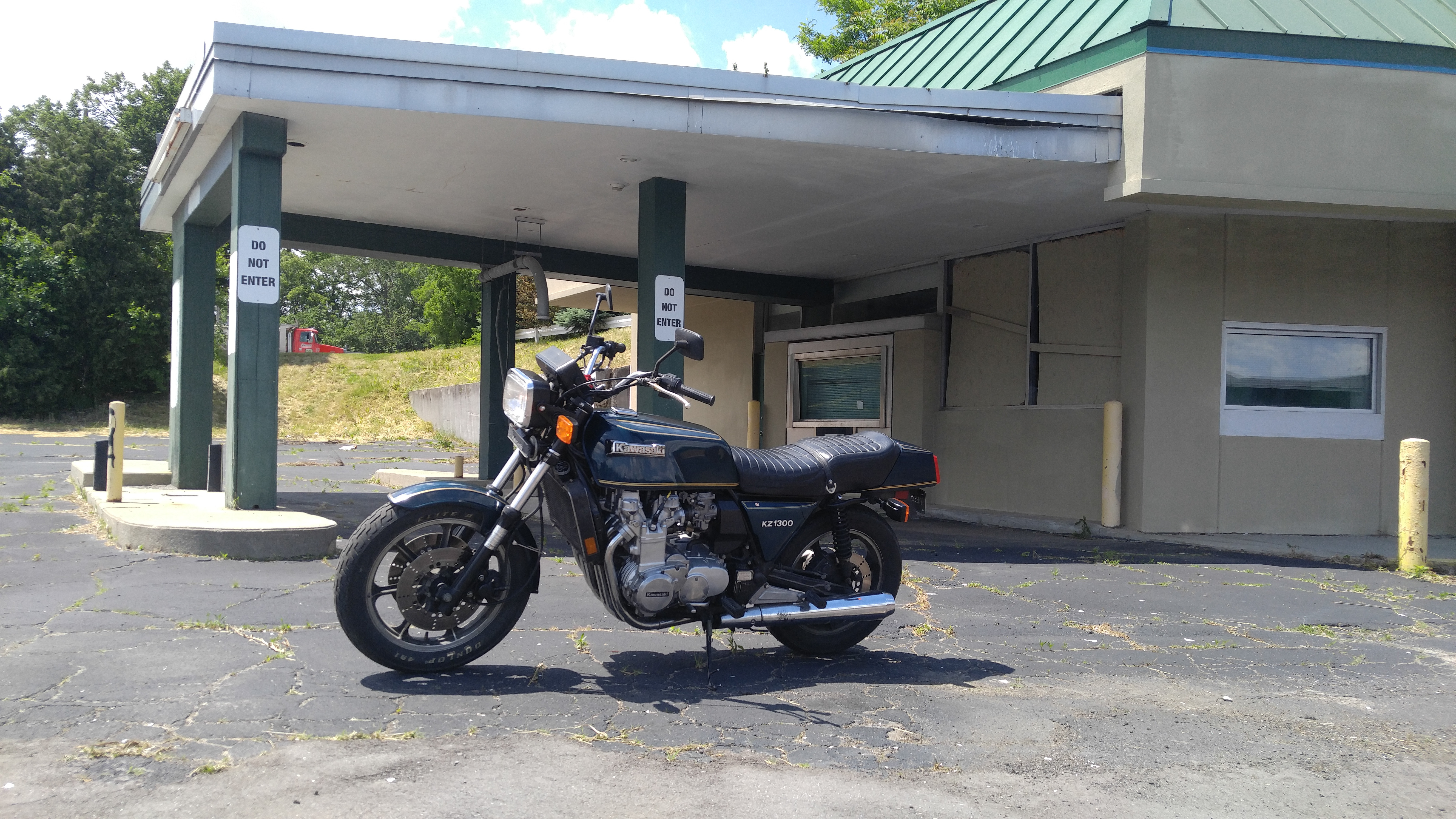 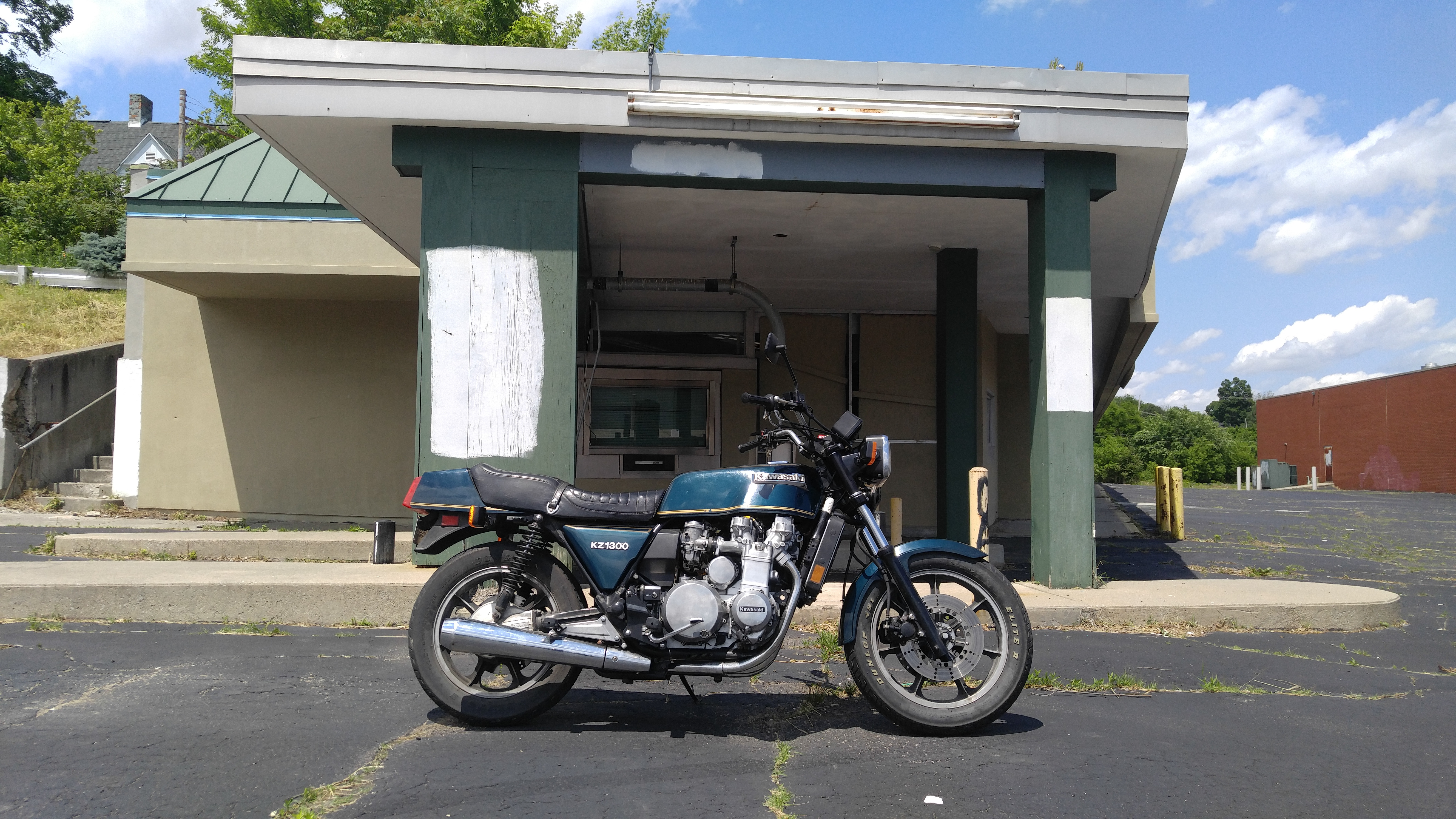 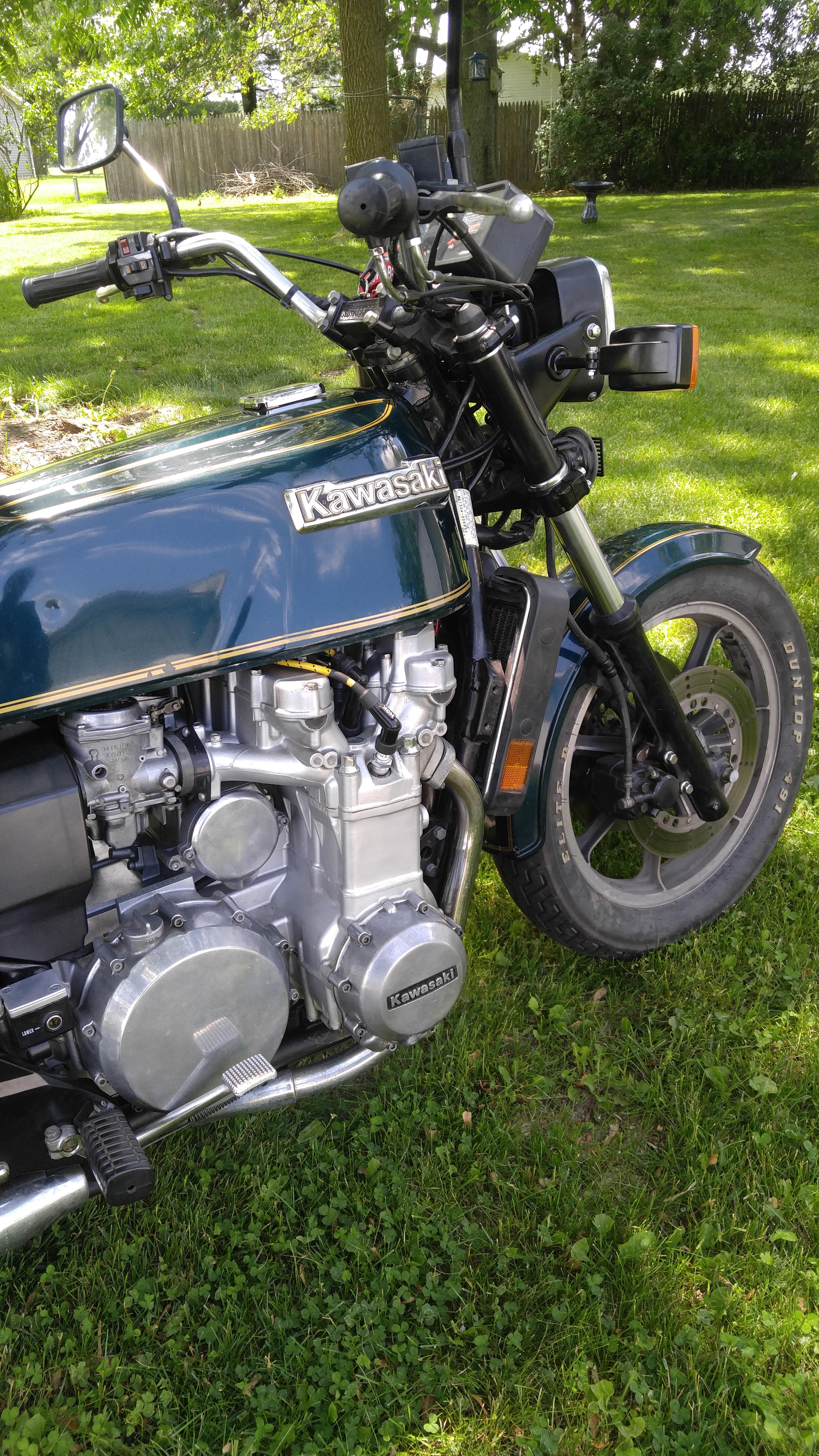 I'm just super glad my 3-4k vibration wasn't an internal mechanical thing. I could've swore forgetting to weight match the piston unbalanced it somehow. And once I knew to look for it, it's super-obvious that it got worse as the bike warmed up.

I had a 1984 Voyager 13 that I bought pre-crashed. It had fuel injection and ran and started every time like an electric motor. Wish I had kept it but couldn't live with the busted up fairing that was hacked back together. By the way got the worst speeding ticket of my life on that bike, cop said 138 uphill and still accelerating when I passed him!
riding the **** out of it!
1977 Naked
2012 Ultra Classic Limited
Top

eades473 wrote:I had a 1984 Voyager 13 that I bought pre-crashed. It had fuel injection and ran and started every time like an electric motor...

138 uphill and still accelerating when I passed him!

"Motorcycling is not, of itself, inherently dangerous. It is, however, extremely unforgiving of inattention, ignorance, incompetence or stupidity." - Anonymous
Top
Post Reply
764 posts